The Allscripts Tobacco Road Marathon features over 20 miles of the American Tobacco Trail (ATT), a former railroad line turned rails-to-trails.  The Tobacco Road Half Marathon normally includes 8 miles of the ATT and overlaps with the southern portion of the marathon course.

Notes related to Spectators are shown in italics below.
Course Descriptions:

Both races start and finish at the USA Baseball/Thomas Brooks Park.  The courses ares mostly flat with only gradual inclines and declines ending with a fast downhill finish.  As many as 18% of marathoners qualify for the legendary Boston Marathon, and all runners benefit from that fast course and ideal temperatures (averaging in the 40's and 50's Fahrenheit).  It is a great setting for your personal record; we even have a bell for you to ring and celebrate your BQ or PR at the end!

Note:  While the course is called a "trail," it is NOT a trail like an unpaved single-track course.  It is more like a greenway and is wide enough to pass other runners throughout the course. 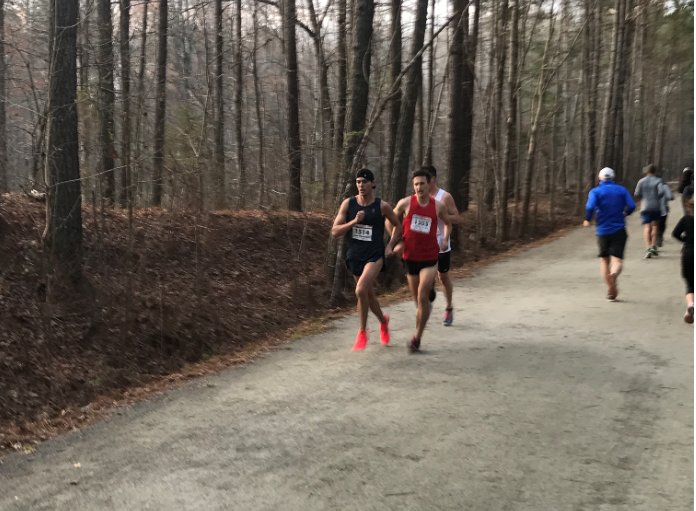 Both courses are USA Track & Field (USATF) certified.  (Certification numbers - Full Marathon 13106NW, Half Marathon 13105NW).  They start together and share the same paved road (Morrisville Parkway) for about 2.5 miles.  Upon reaching the American Tobacco Trail, the course changes to a crushed granite surface of "compacted screenings" as shown in the picture above.  The Full marathon turns north (right) and the Half marathon turns south (left).

For a four-mile portion of the Full Marathon starting just past mile 4 (north of New Hope Church Road--a good place for spectators to park), you can continue on the main, paved portion of the trail or on a crushed granite portion on the side which gives runners a choice of surfaces.

The Full Marathon heads north to a turn-around at about mile 8.5 (Scott King Road, also with plenty of parking there for spectators) and then heads back south to mile 14.5 at Morrisville Parkway, the point where the Full and Half split earlier.  The Full then continues where the Half Marathoners were at their mile 2.5.

Morrisville Parkway is NOT a good place for spectators, but just south of there at miles 15 and 23 (for the Full) and miles 3 and 10 (for the Half) has good parking--and is a great place for spectators because you can see your runner twice--although probably separated by over an hour between sightings for almost all runner paces.)

South of Morrisville Parkway, where the Half Marathoners are now well "ahead" of the Full Marathoners, both courses head south for 4 miles (for the Half) or 4.5 miles (for the Full) to southern turn-around points.  NOTE:  The turn-around points, which are well marked, are DIFFERENT for the Full vs. the Half.  The Half marathoners turn around first, just after a short tunnel (under a road, NC 64).  The Full marathoners turn around a half mile later near Olive Chapel Road.

After the southern turn-arounds, both courses return on the American Tobacco Trail to Morrisville Parkway and then, on paved roads, back to the start/finish area at Thomas Brooks Park.

The races begin at 7:00 AM, and the course closes at 2:00 PM providing seven hours for either distance.  Over 4000 participants are expected to run these events.  New for 2022, we are introducing a "casual start" option (no special registration required) where you may start at your convenience anytime prior to 7:30am.
Course Highlights:

About the The American Tobacco Trail

The American Tobacco Trail is a recreational rail-trail located on an abandoned railroad corridor of the Norfolk Southern Railroad. Constructed in 1906, the original railroad traveled from Duncan to Durham near the New Hope River, transporting tobacco leaf from farming communities in Wake, Chatham and Durham counties for processing at the American Tobacco Company in Durham.

Construction of Jordan Lake in 1971 necessitated moving a section of the railroad corridor (from Bonsal to southern Durham County) several miles eastward, onto higher ground. Railroad traffic decreased after this time due to competition from interstate trucking. One of the last major uses of the railroad was to haul materials for the construction of the Shearon Harris Nuclear Power Plant near New Hill. With the railroad no longer in use, the tracks were removed in 1987

Local residents began using the rail corridor as an informal recreational trail, and in 1989, a group of citizens organized the nonprofit Triangle Rails To Trails Conservancy to promote the development of the corridor into a managed rail-trail. The N.C. Department of Transportation purchased the corridor from the railroad company in 1995 and subsequently leased the corridor to the counties to be developed and operated as a recreational trail open to the public.

It was officially named the American Tobacco Trail to reflect its historical roots, and planning and construction of the trail began. The trail is being built in sections, the first of which opened in 2001 in downtown Durham. Wake County opened its first, 3.75-mile section, from New Hill-Olive Chapel Road to Wimberly Road, in 2003. Wake County opened Phase II of the American Tobacco Trail in July 2005, extending the length from 3.75 miles to 5.5 miles. In 2006, the remaining one-mile section in Wake County was completed to fully extend Wake County's portion of the trail to 6.5 miles. Additionally, Wake County added a trailhead that accommodates 45 vehicle and 10 horse trailer spaces. Two restroom facilities were added to New Hill and White Oak trailheads.

Read more about the American Tobacco Trail or on TrailLink.